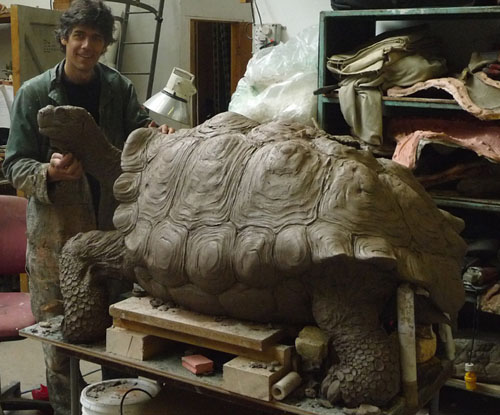 Lonesome George
Another Galapagos tortoise is in production. This time its the famous 'Lonesome George'. The sad old soul thats the last living example of his species.
13/12/2011
I've had a request for a bronze version of George, and I've been at it for a few months now. This is the 1st attempt, which ended up a little on the large side. I've taken it to be fired at an industrial kiln in an attempt to reduce the size a little. Fingers crossed that everything it fires ok - it's a 7 day firing to 1200 C.
I've nearly finished George mark2 which is quite a bit smaller, and looking good. Once I've made this one the next step is to make a rubber mould, and then take that to a bronze foundary.
George is destined for far off lands!
Next
Previous